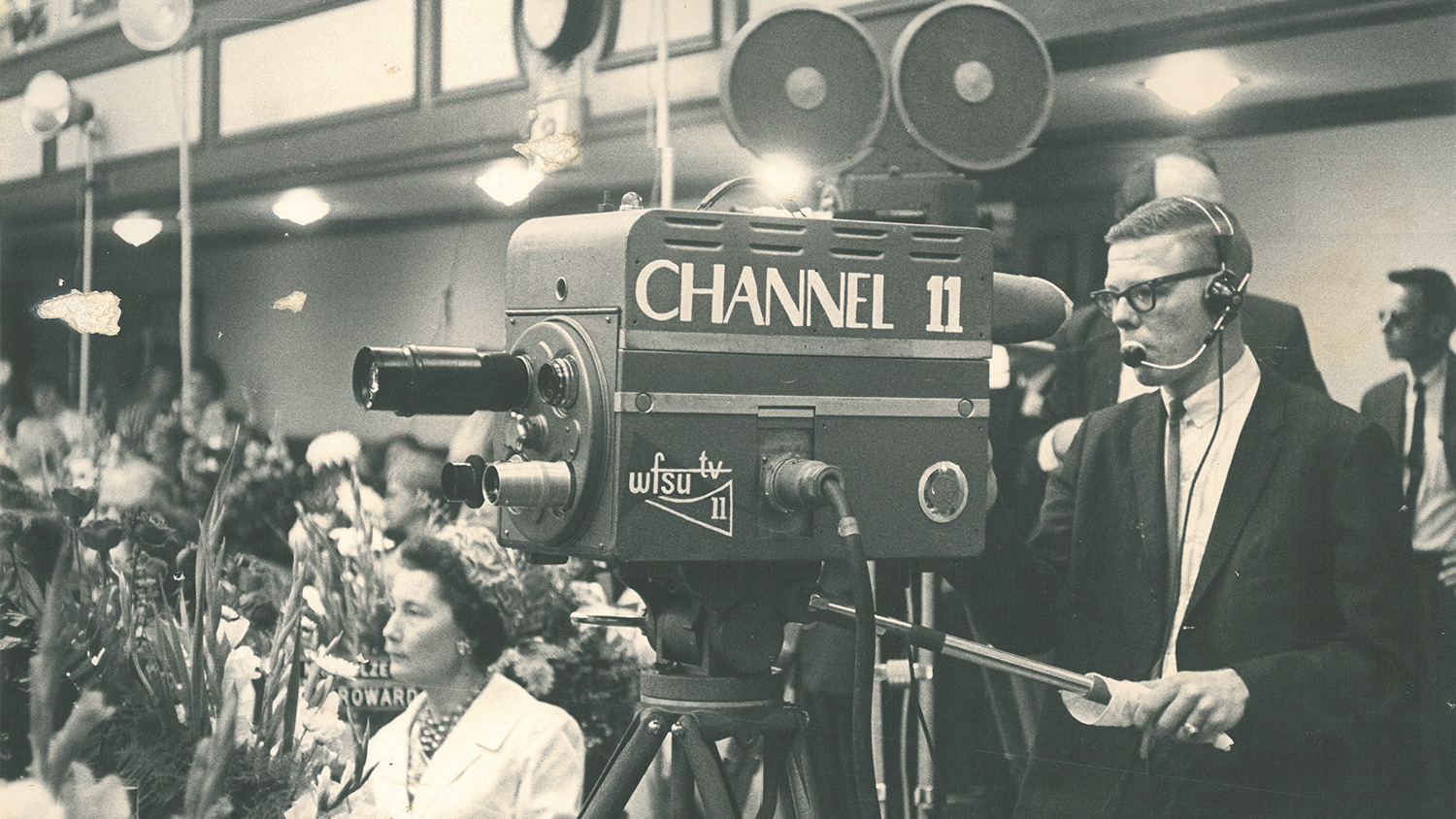 WFSU at the Florida Legislature - in the 1960s?

In 1955 the Florida Legislature established the Florida ETV Commission to coordinate and activate ETV stations throughout the state. One of the stations in the state plan was WFSU-TV, Channel 11. On September 20, 1960, WFSU-TV began operations in a small studio on the campus of the Florida State University. WFSU-TV began as a low-power black and white signal that only partially covered Tallahassee. Most of the schedule was instructional television programs. By today's standards this may seem primitive, but it was a healthy beginning.

During the late 1960s, WFSU-TV began to expand its operations. The Corporation for Public Broadcasting created in 1967 by Congress, and the Public Broadcasting Service (PBS), formed in 1969, were instrumental to its growth. The concept of public television broadened the scope of programs offered by WFSU-TV resulting in larger audiences. Channel 11 began broadcasting with maximum power in 1972, and shortly after converted to full color.

Panama City
On July 11, 1988, WFSU-TV began broadcasting to most of Northwest Florida via its new 500-foot state-of-the-art transmitter tower on UHF Channel 56. Prior to the new transmitter installation, some of the Panama City/Bay area had received WFSU-TV's signal through a low-power translator (Channel 22). The new transmitter served residents within a radius of 40 miles from the tower site located in West Bay community of Seminole Hills. Late in 1987 the project was assigned UHF Channel 56 and call letters WFSG by Federal Communications Commission.

Satellite Services
In the early 1980s, coinciding with the construction of a new studio and building, a new satellite facility was one of the most exciting innovations at WFSU-TV: it included up-link and down-link capability. This allowed WFSU to receive programs from other public television stations or send programs for reception by stations throughout the nation. WFSU still uses satellite technology today and can carry several channels of alternative programs to provide WFSU-TV and other public television stations with an increasing variety of programming options.

Cable Access
In 1995, WFSU was granted a local cable access station that would feature programming for and about the Florida State University. This channel began as FSU 47, migrated to Channel 6 and is now known as 4fsu. 4fsu features up-to-date information about student and faculty affairs at FSU.

Today, WFSU-TV presents a wide variety of programming. It is able to offer programming directed to cultural, educational and special interests. WFSU-TV is unmatched in public affairs, and for the origination of special events. Locally produced programs include Issues in Education, dimensions and Capitol Update (among others), focusing on The Florida State University and statewide government, respectively. Local programming is offered in addition to adult and children's programming offered by PBS nationally.

In May 1948, the concept WFSU radio began when the new Florida State University Men's Government Association allocated funds for a campus radio station. On January 21, 1949, with call letters approved by the FCC, WFSU aired its first program as WFSU - 660 (AM). Broadcasts included 3 hours per evening, Monday through Friday, of campus news, drama, interviews and a disc jockey.

Initially WFSU was a student run and student oriented station - its FCC license only allowed it to broadcast within the confines of FSU's campus. To encourage student listening, radios were put in each dormitory.

Programming expanded and the station grew, but in April of 1953, complaints from the surrounding community had forced WFSU temporarily off the air. The signal had been leaking off-campus and in the 1950s this was a 'no-no' for campus radio stations. Campus advisors hoped the station would return for fall semester.

For fall of 1953, WFSU applied for a low-power FM educational license to broadcast within a fifteen-mile radius of the FSU campus. The station, to feature cultural entertainment and music, was approved. Beginning in July of 1954, the new station, WFSU-FM 91.5, broadcast from 2 to 6 p.m. daily. Soon after, WFSU moved to an 80-hour broadcast week. The station joined the National Association of Educational Broadcasters, gaining access to a national network of educational programming as well as the BBC and French Broadcasting Service.

The big break for WFSU-FM came in 1954 when station managers learned that no local commercial station would carry FSU football games. WFSU then carried an exclusive broadcast, prompting sports fans to buy FM receivers to receive the station.

In 1970 the station became one of 90 charter members of National Public Radio and later carried the inaugural broadcasts of All Things Considered. However, during the 1970s, budget cuts and changes in local broadcasting caused WFSU to cut back from a then 24-hour station to 20 hours per day. There was also a change to an all-classical format, with mixed reaction from the community.

In March 1975, WFSU-FM inaugurated live coverage of the Tallahassee City Commission. In March 1976, it reactivated the Florida Public Radio network earlier headquartered in Jacksonville. FPR, authorized under a contract granted by the Department of Education, still originates from the Tallahassee studios.

Throughout its history, WFSU occupied area across campus. From the top of the Longmire building in 1949, to the basement of the music building in 1954 to the fourth floor of Diffenbaugh Building in 1972. In 1982 WFSU-FM followed WFSU-TV to the new five-and-a-half-million-dollar broadcast center near the FSU golf course.

By 1986 WFSU continued to grow, but with no back-up power for its signal, listeners suffered frequent outages and poor service in the hilly regions of NE Tallahassee. A new broadcast tower NE of town became available, but WFSU was in competition for the 91.5 position on the dial with Georgia Public Radio. To find a solution, the station made an application for 88.9 FM. The new 88.9 signal would broadcast at 95,000 watts from a tower 1,248 feet high. However, the lower power 91.5 was still in WFSU's possession. By spring of 1991 news and information migrated to 88.9 and 91.5 held onto the classical music format. A half million citizens at this point in time could receive one of these stations. 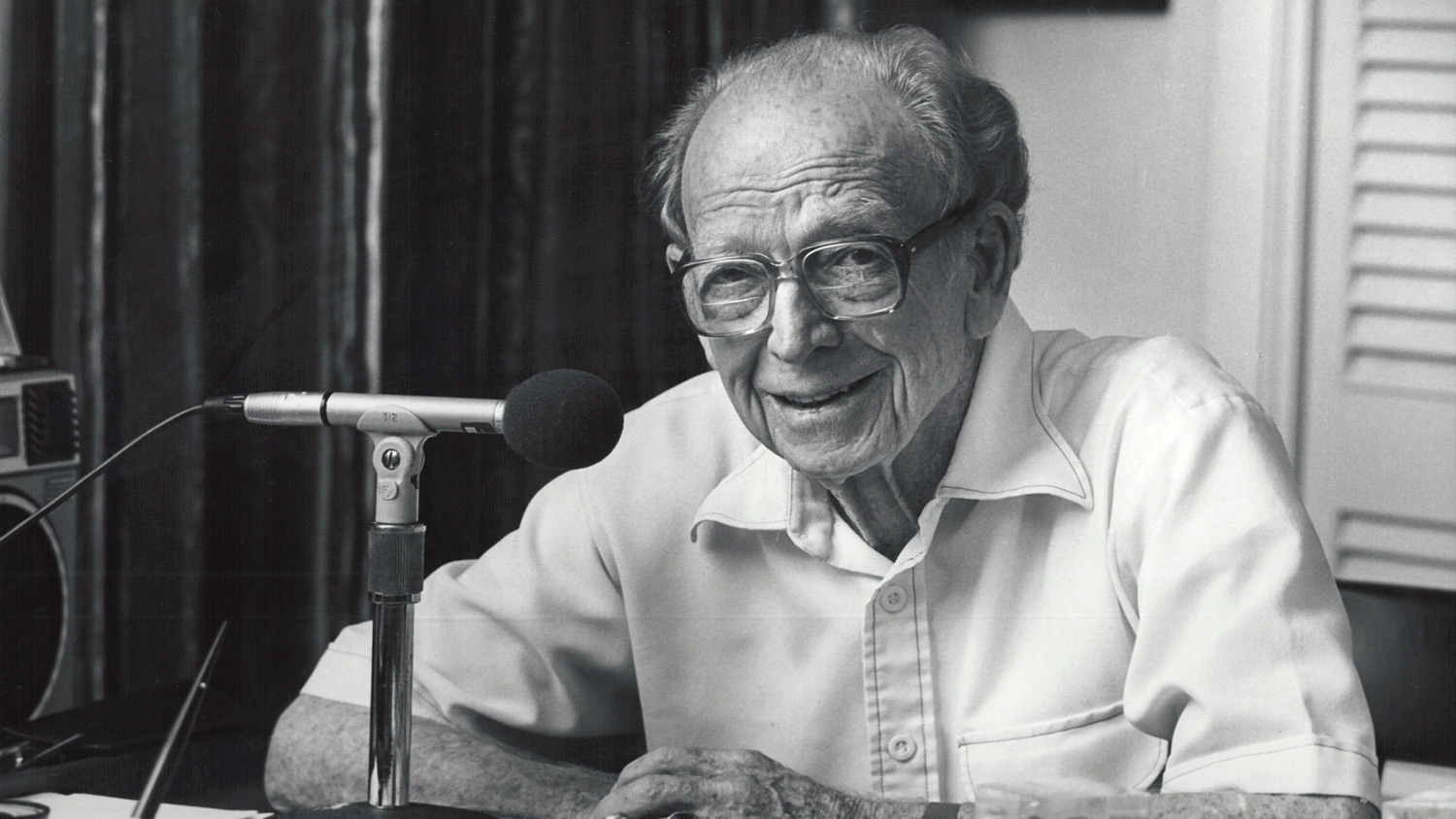 From 1981 to 1991, Red Barber was a regular on NPR's Morning Edition and hosted via WFSU's radio studio.

Throughout its history, WFSU has been honored with numerous prestigious awards for journalism, professionalism, reporting, documentary and news: proof of which adorn its walls today. Additionally, WFSU proudly remembers the period from 1981 to 1991 when Red Barber, a regular Friday feature on NPR's Morning Edition, hosted directly from WFSU's studios in Tallahassee. In 1993, a year after Barber's death, the entrance to WFSU was dedicated to Red Barber by Bob Edwards, Barber's NPR cohort.

In the early 1990s an informational program, Capital Report, began to cover the Florida legislative session. In 1994 radio began the Radio Reading Service for blind and physically handicapped persons in our local area, which continued until 2009 when the legislature cut funding for the program.

More in about
Local Message